Once upon a time, in a University far, far away, a lone wolf biologist sat in her little research office writing about the social behaviour of the wolves she has seen (in total so far, 16 captives and 53 wild!), when suddenly she receives a very interesting and unexpected email from a film company, Blink Films, “…Your research is very interesting and we would like to include it in our new animal communication documentary series….” – wait….what? Seriously!? That’s amazing!! The lone wolf biologist just received an absolutely amazing opportunity! And with that, off she went to see more wolves!! Of course, a big thank must go to ‘Gandalf’ (Sean) for recommending this wolfy ‘Hobbit’ – so, thanks ‘Gandalf’ for this next great adventure!!

Without a second thought, I said yes, yes, YES! To taking part in the documentary series – a chance to exhibit my research and show just how communicatively complex and awesome wolves are – brilliant!…….But, how does all this TV stuff work?? What was I to expect? After all, this was going to be a little different to presenting my work to a lecture theatre full of academics, or a lab full of undergraduate students…..hmmm…..However, one thing was for certain, Blink Films wanted me and my research and they needed me in Exeter (UK) post-haste! So, they popped me a purple plane (!) and flew me down! 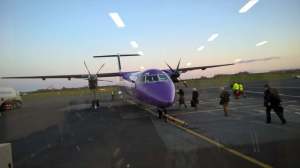 My task was then to film with a new pack of wolves at Wildwood Escot, a pack of 6 Swedish Eurasian wolves (Canis lupus lupus, all siblings, 2 females and 4 males), only just reaching the age of 2 years, who I had never met before! And, who potentially (due to their ages) were engaging in frequent dominance-submission displays, possibly even engaging in conflict!……but, more on this later in part 2…….

Another new wolf to meet – what a handsome lad! (Photo credit: ER Hobkirk)

So, what was the experience of filming for the documentary really like?? In short it was nerve-wracking, intense, and blooming incredible! It was a lot of fun, once I got past the initial camera-shyness (me, shy? I’m sure everyone who knows me who just read that is now laughing!), and buckled myself in for this wild ride, I began to voice my research, to the delight of the director; “great you’re a natural!” he exclaimed – cool, I thought, before quickly uttering my next wolfy spiel……….Then before I knew it, I was knelt with my video camera in hand, hidden in a bush, recording the wolves (just as I do on fieldwork), with an even bigger camera recording me, recording the wolves, like mise en abyme!! Then came the finger close-ups, altering the camera zoom and then swiping across a laptop! Hope my nails were clean….then again, it wouldn’t be proper fieldwork without a bit of muck!

And of course, my fave moment was filming with the wolves in a more direct manner, knelt on the ground right in front of all 6 wolves, explaining their pack dynamics, and their current, real-time behaviour as they engaged in social interactions right behind me – incredible! The lower ranking members of the pack attempted to get closer to the crew and myself, and as a consequence, the higher ranks would give the lower ranks some clear visual (in the form of facial expressions!) and auditory cues, to let the lower ranks know their place, and not to approach the new strangers and their peculiar possessions! As I have said time-and-time again though, despite some of these social interactions appearing aggressive, it is just the way in which wolves communicate – the interacting wolves are seldom harmed (except for perhaps receiving a bruised ego!). What’s more, is that after the first hour or so of filming, the wolves were ‘chilled’ with the film crew, equipment and myself – they demonstrated just how quickly wolves can adapt to novel situations – which again, was absolutely amazing!! Wolves never fail to intrigue and fascinate me!! 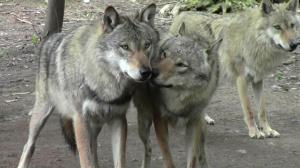 While filming, directly behind me, the wolves engaged in some nice social interactions, as if posing just for the camera! Here a lower rank actively submits to a higher rank, in a ‘friendly’ manner – licking and nibbling at the higher ranking wolf’s mouth! (Photo credit: ER Hobkirk) 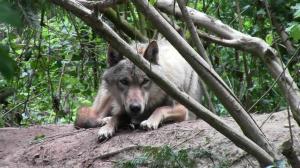 While observing the intriguing social behaviour of the wolves, one of them decided to observe the weird behaviour of us humans from his hiding spot! Just look at that face, those eyes! Almost piercing your soul with those peepers! (Photo credit: ER Hobkirk)

All in all, as an active researcher, filming for a documentary is an opportunity not to be ‘sniffed at’ – it’s quirky, it’s fun, it’s like being on fieldwork without the stress of trying to gather data! But, more importantly it’s like a massive conference talk, a chance to tell folk about your research, about its significance – and more importantly, a chance to educate people – education is key if humans are to ever co-exist peacefully with apex predators – and understanding the intimate relationships, the familiar social communicative behaviour of wolves, is one step closer to showing people that wolves are not malicious machines, that just kill and sleep  – they are far more complex than that, and are in fact, capable of conveying and perceiving ‘emotional’ responses, just like us!

Me and the filming crew – what an incredible experience…… (Photo credit: G Hyde)

…..And cut! Until next time, keep calm and love wolves! 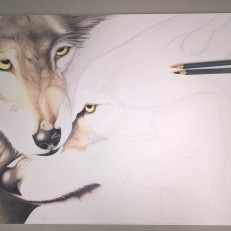 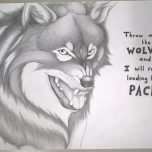